Am I the only one that thinks Real Life has been… completely and totally on fire of late?

This strip has been around for over seven years, and was a pretty big name for a time – but I haven’t heard much discussion of it in recent years. Oh, it never went away – it has been steadily moving along and doing its thing, and doing it well enough to get by. School and life reduced the consistency of updates (though in an ideal world, three to four strips a week should still be enough to keep anyone happy). For a while, it felt like it was just going through the motions, and not much more.

But recently… recently, things seem to have changed. I felt like there was a spark flaring back to life. I couldn’t pinpoint a single strip where it happened… but I noticed that it had migrated from the bottom of my reading list up towards the top. Real Life had gotten its groove back, and was moving along a cut above the rest.

From a personal perspective, I’d say what has helped is getting back to telling tales of… well, of real life. As of today we’re embarking on recollections of Greg’s adventures in I.T. – I can already see it is going to be a goldmine of humor. Before that we saw Greg’s experiences at culinary school, his cooking externship, him and Liz traveling around and just plain old living life. Lots of fun, lots of funny, and all close enough to home that the reader could connect to the jokes. Storylines and strips clearly based on the very real experiences of Greg Dean (the creator), which could then be easily applied to the life of Greg Dead (the main character).

I first discovered Real Life because it had won a WCCA for Best Reality Comic. I can’t remember what other comics it beat out, only that I felt they deserved. So I went in to take a look at this strip called Real Life… and was furious. Time travel, supervillains, artificially intelligent consoles – there wasn’t anything Real about at all!

(It should be noted that I felt similar frustration at Questionable Content winning outstanding Slice-of-Life comic this year. It isn’t that these comics aren’t great comics – but I’ve always felt they’ve sleazed their way into these categories and taken the prize away from comics are that genuinely down to earth in a very real way.)

(Which might just be an argument for adding a Magical Realism category to the show. But that, really, is a rant for another time.)

Eventually, I realized that the comic itself was good stuff, even if I felt the title something of a misnomer. And I’ll be honest – it was fun to watch Tony act out the criminal mastermind, and see the cast and crew get into antics that clearly didn’t happen in the real world. 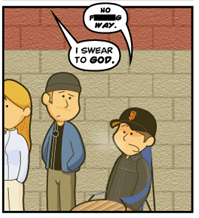 But lately there has been more of a focus on the autobiographical, on the genuine stuff itself… and it works. Man, but it does work.

The strip has also come a long way from where it began, and I hadn’t realized how much until I took a glance back through the archives. It isn’t a surprise, really – almost any strip that has been running for that many years (especially with a consistent update schedule) has a tendency to improve. But while the basics are the same, we’ve gone from simple talking heads to… bright and dynamic talking heads in a world of detailed backgrounds and vibrant colors! Sure, I imagine it’s all just a collection of sets he created for continual re-use, but that doesn’t make it look any less good.

So… yeah, this post is pretty much just to show a little love for Real Life. I’ve definitely been enjoying the solid fun of the strips, and it has been getting a grin from me with surprising constency of late. We haven’t had any big stories of late, no epic tales or crazy adventures – and I’m perfectly fine with that. Just solid humor, day after day, and a look into something that really is, these days, genuinely down-to-earth.

That’s the mark of a damn good comic in my book.