The Best of Comic Genesis: The Wings of Change

Have you ever had a comic that is so good it’s frustrating?

For me, it’s The Wings of Change. It’s a strip that has been around for some time now – over half a decade, in fact. I’ve been there with it throughout that entire run, as it began during the Great Framed Escape of ’01 – and let me tell you, that brings back memories.

So it was, drawn by their part in the crossover, that I was there for the first strip of the comic’s actual story. It’s a damn good start, too – we get dropped right into quite a bit of action, in an exciting and clearly fleshed out world with several interesting characters – a dour minidragon who happens to be a ranger, a young (and winged) half-elf who wants to be a ranger, and a sentient unseen tree-being with a somewhat vicious sense of humor. 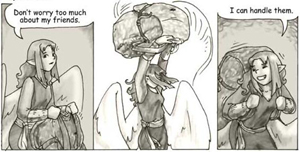 The strip immediately sets itself up as a fantasy style adventure with a solid emphasis on light-hearted jokes, as our protagonists start out trying to convince an extremely senile elder dragon that he should take on a human form when in human lands, rather than wandering about in his normal massive form and inadvertantly causing a war. Various hijinks ensue, they eventually manage to make him change…

…and his human form promptly falls from the sky onto a pixy house, killing the parents and leaving a half-dozen children instantly orphaned.

It’s a rather shocking transition – but not quite as shocking as the fact that the story doesn’t let this change the tone of the strip. The kids recover, Mitch and Hazel argue over who has to become their caretaker, and life moves on. To the strip’s credit, it manages to make this work almost flawlessly, and the reader finds themselves forgetting the awful incident almost as easily as the cast seems to.

The rangers and the pixies start to settle in, and we get the sense the strip is going to focus on the friendships developing between them, and their own personal growth and character development.

Of course, only a handful of strips later, we get a prophecy (from a surprisingly irreverent godly voice) about a storm on the horizon that might change the very nature of the world. It’s the standard vague and almost entirely useless spiel, but it definitely sets the tone of the strip a few steps higher.

From there… well, quite a lot both happens and doesn’t happen. The artist, Mari Rose, has created this fantastic cast of characters, and almost every one of them is having their own adventure. We get to see everything from the god of knowledge outclassing magic with simple smarts to the botanical version of Gumby squishing deformed mutant fish. The strip is filled with fantastic art, a good sense of humor and a compelling story. Well… several compelling stories, as it were, and that seems to be both a good thing and a bad thing. Right from the start, she’s beset by Robert Jordan syndrome, and that means the plot is going nowhere fast.

You may have heard of Robert Jordan – if not, he happens to write a little fantasy series called the Wheel of Time. It’s a powerful, compelling epic story that has thousands upon thousands of pages to its name… and is in danger of never coming to an end.

You see, Robert Jordan wrote a world filled with interesting characters… and found himself paying equal weight to each and every one of them. Early on, events proceeded without difficulty, but as more and more characters appeared, and each went on their own way… time slowed to a crawl. In one of the more recent books in the series, the entire book essentially takes place over the course of a single day, with us being shown the events of that day for every one of his myriad heroes and villains.

I like most of those characters – but it impedes the story. Without a focus, there will never be progress. This has been one of the greatest concerns regarding the Wheel of Time – and one that The Wings of Change has been suffering from as well.

Let’s compare this strip with Dominic Deegan. The clearly have a similar setting, and both favor a crisp, clear art style. Even aside from those similarities, both comics have the same sense of purpose and the same balancing act between personal developments and epic, over-arching plot lines. Even, occasionally, the same flair for painful little puns.

These days, Dominic Deegan is one of the most well-known strips around. It has had dozens of story-lines and more than a handful of epic, world-changing arcs. The Wings of Change, meanwhile, remains a nice comic, but certainly not a mover and shaker in the webcomic world – and since the comic began, less than half a week of time has passed.

Dominic Deegan started almost a year after the Wings of Change.

The difference, of course, is in the update schedule. It may not be the only difference – but it is the biggest one. I’d easily say TWoC has just as strong a sense of story, art and characterization – but time moves along at a crawl. Updates come once a week, not once a day, and filler is an all-too-common occurance. This doesn’t make it a bad comic, of course, and the artist certainly doesn’t owe us more comics…

But still. You can see that sense of potential unfulfilled. You can see how much more this comic could be, and how far away that inevitable epic plot really is.

Fortunately, the artist saw that too. She recognized the difficulties that have cropped up in folowing so many different characters at once. She noted that more updates certainly wouldn’t hurt. And that’s step one – recognizing the issue. From there… well, that remains to be seen. Regardless of where it goes from here, I’m confident that the strip will at the least continue on as it currently is – an enjoyable look into a world filled with a diverse cast of unique and engaging characters.

And I’ve got a feeling it’s on its way to being so very much more than that.