The Proper Way to Start the Day

I’m not quite sure how it has come to pass that I haven’t previously mentioned Breakfast of the Gods. It isn’t just that it deserves it – I genuinely remember talking about this strip, at length, on a prior occasion. But searching the archives reveals nothing, so I can only conclude I was merely trying to force it upon my friends in an attempt to ruin their childhood memories.

Breakfast of the Gods is one of those comics that takes a seemingly silly topic and decides to transform into something filled with drama and depth. This isn’t something new – Erfworld does it for turn-based strategy; Cheshire Crossing follows the adventures of Alice, Dorothy and Wendy; and whenever we catch a look at the characters of Something Positive enjoying a round of role-playing, it is usually in a similarly surreal setting.

But even with this evidence, if you had told me a year ago that one could create a powerful and compelling story about the life and death of cereal mascots, I would have called you a goddamn liar.

I’d have been wrong. 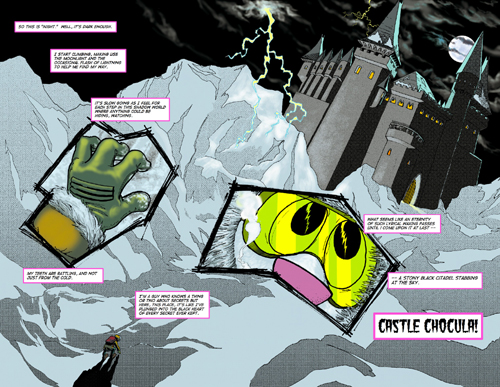 Brendan Douglas Jones has put together a world wherein the likes of Captain Crunch and Tony the Tiger stand for honor, courage and loyalty. Count Chocula and his minions torture and murder innocent mascots, and seem to have the lands in an iron grip of despair. The fate of all Cerealia is at stake, and only the mystery of the land’s long-slumbering King might promise the return of a complete and well balanced breakfast…

Wait, why are you laughing? This is serious business, people!

What really impresses me about Breakfast of the Gods is that Jones manages to actually capture a genuine sense of dramatic tension, despite the obviously ludicrous nature of the setting and the cast. He keeps the characters true to form in appearance – the art is perfectly cartoony and brilliantly rendered, which makes it all the more disturbing when the tone grows truly dark. That blend of the silly and the dark is what makes the comic so surreal, but also what makes it so effective.

This isn’t just parody for the sake of parody – though it might have started out as such, it has developed into a genuinely engaging story. Yes, I’m interested in seeing which ancient mascot from the past is brought into the show – but far more than that, I’m eager to see the heroes fight their battles and the mysteries of the Kingdom revealed.

Breakfast of the Gods is another series that wins on sense of style. Jones is able to take the characters from battle on the high seas to noir-style detective drama in a heartbeat, all the while weaving an epic story out of absurd elements. The first chapter, entitled “The Last Good Morning,” is finished – and seriously, is that not an awesome name or what? The title for Chapter Two, “O Cap’n, My Cap’n,” is chosen equally well – and the chapter itself is moving along at a steady pace, after a brief hiatus between the two.

Now’s a great time to dig in – assuming you don’t mind having part of your childhood permanently warped in your mind.

For a story like this, that’s a very small price to pay.