A Success This Year 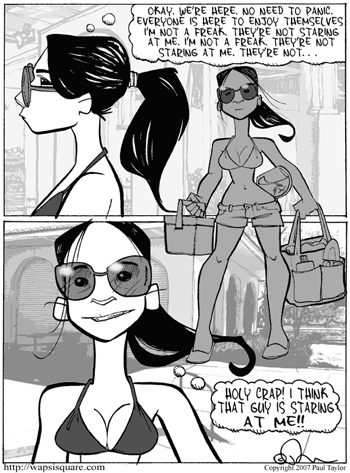 Once, Wapsi Square held a prime spot among my favorite webcomics – but my interest in it has waned in recent years, largely with the rise in strange mythological mysteries over the down to earth character development drew me into it in the first place.

This isn’t to say the comic has gotten bad – just that it has gone in a different direction than I would have liked to see. That’s the creator’s prerogative, and that’s fine – and if nothing else, the appearance of various mythological and spiritual beings has given Taylor a chance to really stretch his artistic skills, and he’s done so with style.

But that said, I am loving the latest arc, wherein Katherine – who is introverted, isolated, shy and a tad unintentionally creepy – decides she should go to the beach. (With, of course, her pet fish Oscar.)

Katherine’s evolution over the course of the comic has been, at least in my opinion, one of the most genuine developments. And it just might be that I find myself more interested in the more unusual characters – Hannelore from Questionable Content is another character who has grown in confidence and social capability, and the development these characters has gone through strikes me as a much more profound journey – or at least a much more recognizable one – than many of the changes others undergo in most webcomics.