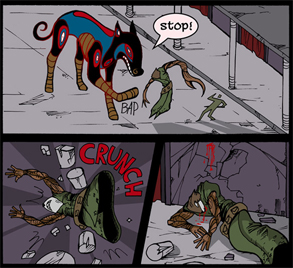 Now, this isn’t to say that most updates of this strip aren’t quality pieces of work, because they are. While the recent arcs haven’t quite had as much momentum as the early chapters, I attribute that more to the need to deal with a developing plotline, rather than being able to focus quite so clearly on small concepts and story-arcs. I think it would be a challenge to deny that this comic is a masterpiece, both visually and conceptually – but I’ve spoken on that before.

No, what caught my eye was how well it captured a demonstration in contrasts.

The strip features Coyote, trickster god of some reknown, and a minion of his, Ysengrim, who has flown into a rage. In panel one, we see Coyote stopping his minion’s rampage with a swift blow. It is comical in appearance – the image of the oversized Coyote dwarfs the other figures, even obscuring their features, and the blow itself appears as merely a playful tap, like that of a child playing with a toy.

In the following panels, we see Ysengrim’s broken and bleeding body hurled across the room, shattering marble pillars and cracking the stone wall.

Gunnerkrigg Court is all about contrasts. It blends science and magic without hesitation – melding the ordinary and the extraordinary is Tom Siddell’s stock in trade. Coyote is a silly being, full of mischief and pranks – but also incredibly powerful, and vastly dangerous. Indeed, Reynardine also falls into that category, as a killer demon trapped in the body of a stuffed animal. And, in fact, the mystery that surrounds the entirety of the strip revolves around things not being quite what they seem – there are many secrets throughout Gunnerkrigg Court, from the teachers to the students to the school itself, and exploring those differences is the driving force of the strip.

What makes today’s strip truly great is that it establishes the contrast so well – and more than that, it establishes it within the reality of the strip itself. Plenty of comics mix humor and story from one day to the next, but that is something largely experienced by the reader. For the denizens of Gunnerkrigg Court, that dichotomy is something they live with every day.

Being able to show that is just one of the elements that makes this such a damn good comic.