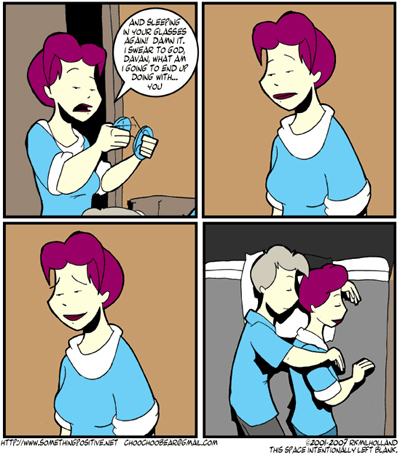 Something Positive is in a strange place, and I’m not entirely sure what to think of it. Which, in many ways, is a good thing.

From what I can tell, PeeJee has proposed to Davan that they commit to each other as platonic life mates. It is not an entirely illogical progression from their current state – they are close, as close as friends can get, and both have a long string of relationships that have tended to end poorly.

Is there more to it than that? I suspect so… though I’m not entirely positive as to what it may be. PeeJee may see Davan as more than a friend – she has definitely shown a certain level of infatuation regarding him in the strip of late… though that may simply have been recognition of how deep their friendship truly is.

She may simply be using this as an excuse, an easy way out, a retreat into that which is comfortable and non-threatening… but there hasn’t been any specific event that I could have seen to directly trigger such an action.

What I am certain of is this – if Milholland can demonstrate one thing, it is that he isn’t willing to settle for simple relationships (or simple characters) within his comics.

I was amused, the other day, when I saw someone ranting about how S*P was turning into Friends – or more specifically, how the comic was set-up so that everyone was forced to end up with their childhood friends, and that it was shown as evil and bizarre to pursue relationships outside of that original social circle.

Now, there is a lot of nonsense being thrown around in that rant there, but what truly made me laugh was that what had triggered this rant was the recent Old Familiar Faces showcasing Branwen. Branwen, who is one of those very outsiders – she did not start out as part of the underlying social group. She started out as Davan’s girlfriend. And, remarkably, their relationship ended well – the break-up wasn’t fun (break-ups usually aren’t), but it wasn’t nearly as ugly as most relationships in the strip. They stayed friends. She remained a distinctly likeable character.

Her latest relationship didn’t end poorly because of some hidden propaganda to sell the idea that characters will only be happy ending up with their childhood friends – it ended the way it did (and the same way others have throughout the strip) because the comic is filled with an incredibly pessimistic view of humanity and their capacity for disappointment.

One tempered, admittedly, by an equally strong optimism of their potential for hope.

S*P has always been a strange mix of ups and downs. It has gone to some very dark places, and the majority of characters are deeply flawed on many levels – but they are also capable of greatness. And happiness. And caring for each other, and overcoming those very same flaws.

Which, yeah, is what people have been saying about S*P for years – and I have, I’m sure, already done so on multiple occasions… but it still impresses me at how well the characters can resonate, and at how willing Milholland is to take the strip in any direction it needs to go.

Many, many, many strips have trouble with the idea of growth. Once they find a nice, simple formula that works, they stick with it. Change is bad, change risks alienating readers. It is the classic reason people mock newspaper strips. Numerous webcomics show the same problem.

But S*P is constantly changing. Characters move away, characters die off, characters grow into different personalities. Life continues on, the focus shifts from one group to another… and, in the end, nothing remains predictable.

I can see the strip pursuing any one of these possibilities, and countless more besides. Milholland has never pulled his punches before, and I doubt he plans to start doing so now.

Just one of the things that makes Something Positive a damn good comic.