Tune In Next Time!

Do you know what rocks? Seeing this posted on the Penny Arcade website:

“A reader wrote in today to tell me that he was doing the New York Sun crossword puzzle for January 30th and noticed this clue for 12 down:  “Tycho’s pal in the webcomic ‘Penny Arcade’ (4 letters).” That’s totally awesome.”

Seriously, you can check it out yourself. Man, they keep this up, and maybe all the useless gaming/comic trivia in my head will allow me to actually solve one of these so-called crossword things. 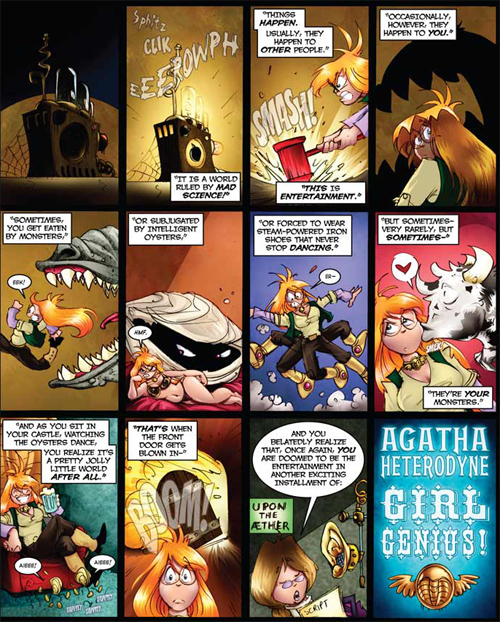 Meanwhile, Girl Genius is wrapping up the latest bit of filler and returning us to the main story; as eager as I am for more plot advancement and other similar goodness, I won’t deny that I’m always a little sad to see these brief installments wrap up.

I have quite a few friends who hate them with an undying passion, and I can certainly understand their concern – the main story of Girl Genius is so relentlessly good that delaying its continuation must seem something of a crime. I can only imagine how much agony it would have been to read the series before its entry onto the web, when weeks would go by awaiting each new issue! The standard modus operandi of the webcomic world, on the other hand, allows readers to get a fix on a much more regular basis, and so it is inevitable that any disruption to the supply would thus trigger rage, paranoia and despair.

But for myself, I find these cheery little “Radio Theater Breaks” to be the perfect counterbalance to the slightly more drama-laden main plot. I would make some comparison here to a gourmet meal, and the requirement for different tastes to provide contrast and the occasional respite between more powerful flavors – but I don’t actually know how all that culinary philosophy works, so why don’t we both presume I said something enlightening and simply move on from there.

It is useful to have these more comedic bits of fluff, but it is also more than that – I find myself quite genuinely enjoying them. The fact is, they have some of the cleanest, tightest characterization in the series – if only because each character needs to be truly broken down to their most basic elements in order to convey who they are in such a short sketch. Agatha Heterodyne is all about science!, Krosp is the inevitable comic relief, Zeetha is simply a badass, and Othar is really, really messed up. Hell, even Ferretina has become a fully realized character over the course of the two installments thus far.

Let’s be honest now – when a creator wants to take a break from their regular storytelling, and does so by presenting another entirely awesome story in the downtime, that is fantastic. I mean, I don’t begrudge folks their… shirt guy tom days, and dead piro days and… you know. I appreciate that they are making some effort (usually), and I recognize that when you are producing a comic like this, on a regular schedule every single week of the year… taking the occasional break becomes something of a necessity.

When that break simply manifests as a more light-hearted outpouring of your creative talent, you really should win some sort of prize.

I should also add that the framework of the Radio Theater Breaks is one of the most incredibly brilliant devices for presenting a story that I’ve ever seen.

There are a lot of top-notch webcomics out there that are good inspirations for aspiring cartoonists, and that provide good examples of what to do and what not to do. But Girl Genius is easily one of a very small handful of strips I can point to and say: This, right here, is a comic done right.

Emulate every facet of it, internalize its wisdom, and one day you will understand how to make an audience irrevocably yours.