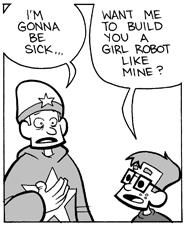 When I was browsing through my backlog of comics, one of the ones I had fallen behind on – and was expecting to shortly put aside – was You’ll Have That. For pretty much all the same reasons as I mentioned on Monday regarding Taking the Bi-Pass.

YHT is another slice-of-life strip without much in the way of an agenda – more polished artwork and presentation, to be sure, but how much more does it have to offer? Isn’t it just another collection of the same sort of casual jokes and storylines seen in so many other places?

So I was wondering – and then I actually bothered reading through the missing month or so of comics, and found myself hurtling through the archive to get caught up, eager – even desperate – to see how the current storyline was going to end, and what the fallout from it would be.

The storyline in question (SPOILERS!) involves Steve (best friend of Andy, the strip’s main character) discovering that his girlfriend once briefly starred in a “Girls Gone Wild” style video – at which point he breaks up with her. And… it’s a reasonable sort of thing to have happen, which isn’t to say his response is itself reasonable but that it is typical – it seems true to life, and exactly the sort of dumb situation that makes for the usual ridiculous drama.

This, really, is YHT’s strong point – it manages to wander along through the normal elements of life, and it does have its share of boring (which is to say ordinary) events wander in along the way… but it also brings in an appropriate amount of excitement, without ever making it seem forced or out of place. When relationships form or break apart, when new characters enter or vanish or suddenly start punching people in the face… it all feels natural.

Which is why it can be easy to think that nothing much happens in the comic, right up until things get shaken up. And YHT seems to be doing just that, while also not letting its current moment of drama overwhelm the entire focus of the strip. That kind of balancing act can be hard to pull off – but clearly it seems to be working, as I find myself eagerly awaiting each update, when not so long ago I was planning on ditching the strip entirely.

This week, we saw yet another moment of change as Steve decides to shave his head. I’m reminded of a similar recent storyline from Girls With Slingshots – but while that one spent what seemed like ages building up to the moment of eradication, YHT dove right on in. For the better, I think… the longer the build-up, the more likely that the culmination of the storyline won’t live up to expectations. GWS – which is otherwise about as excellent a strip as can be found – does seem to have its one weakness in overindulging in redundant jokes rather than actually cutting to the point.

You’ll Have That, on the other hand, simply does its thing and then moves right along. And given that’s usually how life actually works, that can be awfully compelling indeed.