D is for Dracula, Distantly Destructive

So there’s this comic called Dr. McNinja. When first I encountered this strip, I could describe it as little more than a comic about a doctor, who is also a ninja; or in short, a comic about being awesome.

Since then, the description has proven even more accurate than I could have imagined, since this truly is what the comic is all about – the Rule of Cool. The principle, largely, is that you take a bunch of elements that tend to stand in their own genre – such as ninjas, or robots, or wizards, or whatever – and then you throw them together, producing something that is, in theory, profoundly awesome. Imagine: a time-traveling wizard cowboy, trained by monks in the arts of karate and meditation! And so forth and so on – these characters and scenes are driven more by the sheer concept of them than any actual merit of their use. And this is entirely ok – there is nothing wrong with simply sitting back and appreciating the sheer brilliance, say, of tyrannosaurs in F-14s.

No one knows awesome quite like Calvin and Hobbes.

Now, what I find makes me really, truly appreciate Dr. McNinja is that it manages to take these concepts and actually make them work within the story. It has been pointed out that more than a few fans will tend to defend a work by pointing at the bits of “awesomeness” within – but that it takes quite a bit more to make such concepts actually work within the story, rather than exist as a single moment of fun entertainment. Which Dr. McNinja succeeds at – indeed, by this point, the vaguely surreal setting of the comic has become so fundamental that the continual appearance of ghost wizards and robot bears seems not just acceptable, but downright natural.

And there are actually long, elaborate plots built around these concepts – the main characters themselves are all equally absurd, but nonetheless have managed to become well-realized characters with that the reader can be fully invested in. So this is why Dr. McNinja rocks. Also valuable: knowing exactly how far would be too far.

Now, the comic continually seeks to offer new moments of awesome – a challenge that grows ever more daunting, given the various scenes and characters it has already gone through. Among the most recent highlights in the strip was one moment that outshone all others – in which, when Dr. McNinja goes hunting for Dracula, we learn that Dracula has a moonbase, and is able to eliminate vampire hunters via his moon laser.

So, given that this was a moment of crowning awesome in a comic fundamentally built upon such principles, it was with quite a bit of shock when I discovered that self-same scene, last month… in the pages of Marvel comics.

One comic in particular: “Captain Britain and MI13”, Issue number 10, written by Paul Cornell. In a time when I’ve found very little to be excited about in the world of print comics, this series has been one of the few that have stood out as entertaining and worthwhile. This opinion was only further reinforced when this most recent issue opened with a chat between Dracula and Dr. Doom – on the moon. And even more so, when Dracula then returns to his private moonbase, from which he fires not a moon laser, but instead magical cannons that launch exploding vampires at his enemies on the Earth below! 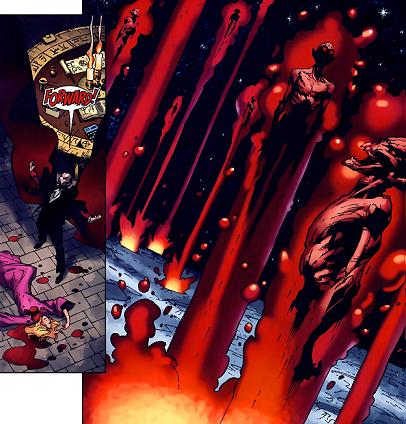 If you're gonna be a villain, it's always best to do so with style.

Now, I don’t know if this was done as a reference to Dr. McNinja, or simply the product of two great minds thinking alike. It really isn’t important either way.

What I do find important is this: When the topic of comics comes up, amongst my friends and I, there is quite a lot of talk about webcomics. Discussion over current plots, new webcomics people have discovered, or even simple appreciation for the comics that are always reliably good. There is almost no discussion at all of print comics – and when the topic does turn to such things, it is almost entirely negative.

Pretty much every single one of my friends reads webcomics, and enjoys them. Almost none still read anything by Marvel or DC – and even when there is both good and bad works being produced by both companies, it is only the news of the worst of it that filters down to our topics of discussion. And while I try to talk about some of the worthwhile comics of recent years – Blue Beetle, Iron Fist, etc – it is hard to do so. They are familiar with the big names, and so they can get frustrated at hearing about poorly-written stories dealing with Batman or Spiderman. It is much harder to get interested in hearing about well-written stories about characters they have never heard of.

But when I can point to a comic, and say, “This comic features Dracula and his moonbase, just like in Dr. McNinja!”? That, they get. That, they can understand. And that has a bigger chance of getting any of them back into comics than any big event, or crossover, or crisis. In all honesty, the vast majority of those have only served to drive them away.

I’m not saying print comics need to directly imitate webcomics in order to succeed. Honestly, just writing decent stories is a pretty basic step one – though one that a lot of comics seem to have quite a bit of trouble with. But tapping into the same level of innovation and creativity as what can currently be found online certainly helps get my attention, and seems like a pretty good step in the right direction.