Over a year and a half ago KeenSpace, the little brother of the much more noted KeenSpot, had a slick little overhaul, re-emerging as Comic Genesis, with a fancy new site to go along with its spiffy new name.

And… since then, not much. I’ve barely heard Comic Genesis mentioned at all – which, if you think about it, is both good and bad.

Keenspace has never had the best rep of the online communities. Despite being a free hosting site where basically anyone could get a start hosting thier webcomic, people tended to look down upon it. The service they offered helped kickstart any number of now well-known strips, but it also meant they had literally thousands of… less than spectacular strips.

(Which is to say, you couldn’t pay people to read them.) It was a grand new revolution, and everyone and their dog was posting their brand new sprite comic / catgirl manga / superhero comic doodled in their notes during homeroom. There was a lot of trash on there, and people got the idea that every strip on the site was just as bad. Countless crashes and technical difficulties didn’t help the reputation, nor the fact that any comic that made a name for itself tended to immediately get ‘promoted’ to the big boys – KeenSpot.

But… that was then, and this is now. Changing the name to Comic Genesis accomplished one of their goals – it dropped some of the stigma attached to the previous name. Of course, with no one talking about how bad the place was… that also meant no one was really talking about the place at all, and I think that is something of a shame.

These days, Comic Genesis is quite a bit nicer. Their new site makes for easier navigation, though the sheer number of comics can still be daunting. They’ve got their free comic book days to help show off some of their top talent. Site downtime? I haven’t noticed any problems in at least a year, if not several. Other sites have had their share of troubles, but Comic Genesis has been stable as a rock.

So it struck me that now would be a good time to take note of some of their best comics. Because they certainly have more than a few that deserve a closer look, and the site itself deserves recognition for hosting them. So here is what we’re gonna see – the Best of Comic Genesis. Expect it to be a recurring feature, every Monday, unless something else grabs my attention and demands a post instead. 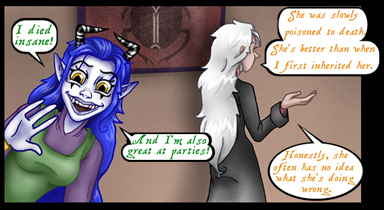 And let’s begin with… Cat Legend.

What is Cat Legend? Aside from one of my favorite strips, that is?

It’s visually exciting, for one. I mean, just take a look – full color pages with detailed backgrounds, dynamic layouts and simply gorgeous character designs. “Pretty” doesn’t do this comic justice – it is outright enjoyable to simply look at the pictures, and there are precious few comics for which that is true.

Oh, it doesn’t start out quite so polished – but that is one of the glorious things about webcomics. Seeing the evolution of a strip, seeing someone learning from the experience, seeing something new and amateur become skilled and professional.

It isn’t any surprise that after over three years of updates the artist, Katrina Santoro, has really come into her own.

What else is Cat Legend? Complex, and that is both the story’s biggest strength and it’s greatest weakness.

It advertises itself as an epic comic, and this is true. Less than a month into the archives, a reader already comes face to face with the political motivations that are driving the most powerful beings in a world on the brink of disaster.

Quite the premise, eh? But despite the momentous events going on in the world, the focus of the story is centered primarily on our young band of heroes, and it is their story that proves most interesting. The protagonists are all children in their own way – even the ones a century old. They all have secrets, often ones even they don’t know the truth of. Seeing them develop has been the central theme of the story thus far, and I can’t complain – each character seems to have a story of their own, and one worth hearing.

The complications that arise in the story aren’t based in the epic nature of the tale itself, which takes place largely offscreen (though not always.) Nor is it due to the sizable cast of characters – these days, each character has their own personal font, which is a useful tool once one gets used to it.

The problem is when Act II begins… and jumps 500 years into the future. Then, in the guise of a recounting of the past, we return to the original story where we began… and the shifting back and forth can prove a slightly disorienting experience. Add in the guest sidestory following one character who had a different path to travel than the rest of the gang… and keeping track of all the different threads can prove a touch difficult. 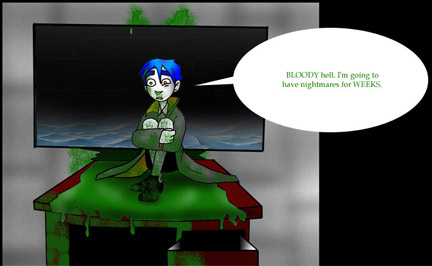 Of course, there are worse problems for a comic to have than having too many stories to tell.

Cat Legend is an epic tale about faeries embroiled in civil war, imprisonment and subjugation, and the potential demise of magic in its entirety. It is also a story about family and friendship, memories and truth, stories and dreams. The epic story may shape the tale, but it is the personal touches that bring it to life, and that leave the reader wanting to see the trials and adventures of this somewhat misfit band of heroes.

For all that the comic has been running for quite a few years, it certainly doesn’t seem close to finishing. There seems to be any number of plot turns and twists yet down the road, along with unfinished stories of both the past and present.

But again – that’s not a bad thing. Sure, the story leaves me wanting more at every turn – but as long as the ride is pleasant, I’m more than happy to enjoy the trip. I’m eager to see how the tale turns out – both the epic events going on around them, as well as the developments of the characters themselves – but I’m just as eager to enjoy every strip as it comes.

And that’s just part of what makes Cat Legend a damn good comic.