The Best of Comic Genesis: The Prime of Ambition 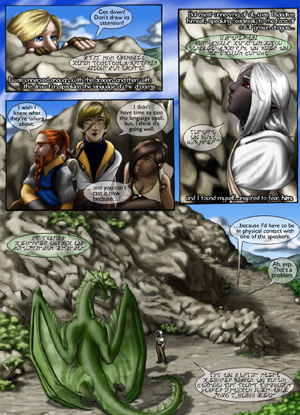 The Prime of Ambition is a fantasy comic, which is usually a sign that a strip will be walking down a well-worn path that many have trod before, telling the same stories that have been told countless times before. This would not be a bad thing, for those stories are still good stories after all these years – but that is not what Ambition is about.

The Prime of Ambition is about telling a new story.

The Prime of Ambition is about defying expectations.

Our story begins with four young heroes on the brink of battle. They have come upon a dastardly sight – several soldiers of a corrupt nation are sacrificing an innocent maiden to a dragon. They know it will not be an easy fight, but they cannot simply stand and watch. With faith in the righteousness of their cause and their god, they charge into battle.

In a single panel they are slaughtered by a half-dozen unnamed soldiers.

They are not the heroes of the story. The two of them that survive are taken captive, and they serve one purpose – as a vehicle to open the story, and begin a tale that I expect will have many unexpected twists along the way.

Ambition, despite having its own story to tell, manages to stay strong on one of the greatest assets of the fantasy story – the setting. Not just its nature, but the fact that one has an entire world to play in and develop, a world of different races and cultures and societies, different lands and different rules. Ambition is set in the world of Oris, and one is able to get a sense for the detail of the setting from every distinct individual and place. The site also includes a guide to the world as well, so one can see it fleshed out outside of the story itself – which is a good thing, as attention to detail carries with it one fatal flaw, the deadly beast known as exposition.

The story is narrated by an elf named Audriel Sillendrey, a figure whose world-view has clearly been changed by the story he is about to tell us. First person narration isn’t a bad format, and is able to give us some insight into his character while leaving the mystery of other characters open. Unfortunately it also means he spends a lot of time – especially early on – explaining and introducing.

It is a necessary evil, in the end, and one made more tolerable by the art that accompanies it – each page is full color and filled with detail, bringing the world to life with every panel. In some ways it is a shame when such gorgeous artwork is cluttered up with text – but like I said, necessary evil. You can’t tell a story without setting the scene, and if the artwork is engaging when in the midst of exposition, it promises to be mind-blowing once the action gets going.

There are less than 60 pages in the archives, and the strip updates once a week, so perhaps its greatest downside is a tendency towards a slower pace – especially given the early part of the story is focused on character development over action. Whether that is good or bad, of course, depends on the characters, and – fortunately for us – that is where Ambition really shines.

As mentioned earlier, the story is told by Audriel, a sun elf – but he is not the star of the show. There are a couple other characters of note, but the main focus of the story is a drow named Thanatos. And Than… well, Than is somewhat complicated to explain.

The narrator, Audriel, hates him – hates all drow passionately due to his own personal tragedy, in fact. So we have to balance his view – that all drow are evil – with Than’s own actions, which tend to present him as a tragic figure trying to make amends for his people.

Now, if that was it, then this would be just another story told many times before. He wouldn’t be just another Drizzt, sure – no dual scimitars, no magic cat figurine, and the people he comes from are an entirely different type of drow; but it would still be falling into the stereotype of the outcast who has to prove himself against a society that distrusts him. Which wouldn’t make it a bad story, but it also wouldn’t be anything new, just the same tension seen – and overcome – countless times in the past.

But as far as I can tell, Ambition takes it a step further – because I get the sense that Than’s kind nature and behavior is all just an act.

I could be wrong. I suspect there is a lot more to it than any simple explanation might give – but there have been enough subtle clues that this apparently kind drow is fully manipulating those around him. That he has an agenda and motives well beyond what has been revealed thus far, and that learning more about that – and about him – is when the story will really start to get moving. He may not be evil, but the way he seems to act and move and speak strike me as those of a character who may well be amoral – who acts according to their own views, not through limits set upon them by society. And that makes for an interesting character indeed.

Of course… this is just my interpretation of the story and the character. Ambition is only in the second chapter, and it could easily have been an overly hasty judgement. As I said – I could be wrong. Who knows where the story could go from here?

But having those questions, and finding out the answers, is the mark of a good comic. Engaging that interest and curiosity is the sign of a good story. And as to whether my theories turn out right or wrong in the end… wouldn’t it be best to go and find out for yourself?