This was the first time I truly enjoyed flying.

Now, to be fair, it is only the third time I have flown. The first time I was 10 months old, so I doubt I was even aware of the fact I was hurtling through the sky a phenomenal distance from the ground. The second time was only seven years back, and was plagued by delays, detours, and other assorted bad things that begin with the letter ‘D’.

The third time I flew… was this weekend, on the way to and from Dragoncon. I had a window seat – but was above the wing, so my view was not all that amazing. Despite this, the flight was comfortable, quick and not much else – and there is something to be said for simple pleasantness.

Especially given where I was heading – Dragoncon is anything but simple.

It was an enjoyable convention, as always. An exhausting, draining, painful sort of enjoyment by the end of the weekend, but it was there, nonetheless. Gaming, panels, concerts, costumes – the great part about the con is simply the sheer amount of activity packed into a handful of days, far more than any single person can absorb. But I had what fun I could… and I was pleased that fun with webcomics was among the highlights of the weekend.

Awesomeness the first: Order of the Stick Costumes! A couple of my friends went as Xykon and the Monster in the Darkness (I’ll try to coerce some pics from them), and later had a showdown with a Haley and an Elan they found roaming around. Sometime later, whilst I was in the gaming room, another pack of costumers wandered in, and I spotted Roy, Redcloak, Thog, and another Monster in the Darkness – and while the costumes were cool, the true highlight was watching gamers suddenly gravitating towards them from across the room, setting down dice and characters for a chance to see the OotSers in action.

Awesomeness the second: Webcomic panels! I have to admit, the large majority of webcomic panels I’ve attended in the past (at previous Dragoncons, at Otakon, etc) have been somewhat… lackluster. This was occasionally due to it being late in the con, and the panelists being exhausted, or due to exceptionally small audiences because of scheduling issues. Whatever the reason, these sort of panels haven’t stood out in the past… but this year, I was astounded. 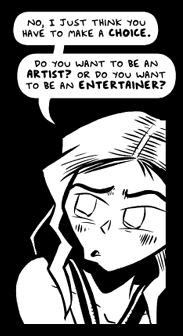 The big panel I saw featured a pretty stellar cast – Pete Abrams, Jennie Breeden, Rob Balder, The Gneech, Indigo, Bill Holbrook, John Lotshaw, and Kittyhawk, from what I can recall. This wasn’t just a large panel, but also a lively one – having so many creators on stage meant both a wealth of information and different perspectives, as well as a fast-paced, joking atmosphere that emphasized that these are all exceptionally smart, funny and talented people. There was a lot of banter, and the panel was as much about entertaining the audience as enlightening them.

Another panel followed shortly thereafter, and was something of a smaller event – which ended up meaning it focused more on some of the technical aspects of the webcomic process. (Which, for my money, was a worthwhile follow-up on the previous panel.)

All in all, despite the fact that webcomics are just one small element of the countless topics that make up Dragoncon, I felt their presence was strong and successful, and that was a pleasant thing to recognize.

I’ll be back with proper comics discussion tomorrow, once I’m completely caught back up on things. There are a lot of topics floating around I want to mention (including a number of webcomics that have recently come to a close), but for now, I’ll just direct folks to Sam and Fuzzy, whose recent storyline was a brilliant example of… well, of everything the comic has been doing right for the last few years.

The arc doesn’t involve any great world-altering changes or epic battles… but it does highlight adept characterization, undeniable humor, and some subtle messages about life in general. (And, of course, maintains the usual standard of quality art and reliable updates while doing so.)

There isn’t much more about it to say, other than point out a job well done. When a webcomic can pull something like this off in less than a dozen strips, I’d say it’s most certainly worth a mention.