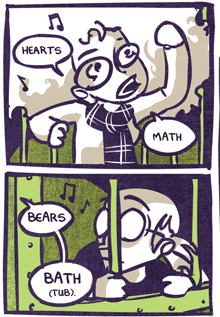 Stuff Sucks coming to a close took me by surprise – and though it was sad news at first, it helped me realize a number of things about the comic, and for that I am grateful.

I hadn’t seen the ending coming – or even suspected one was in store – because I had become accustomed to the many, many webcomics out there with perpetually ongoing plots. Stuff Sucks, I naturally assumed, would be another such comic – the characters would continue to have wacky hijinks and interactions, relationships would hover up in the air, and resolutions would only come one small step at a time.

Instead, however, the comic has a cohesive storyline that has been heading for a very specific end. It reached that end perhaps sooner than intended, but the ending is a genuine one nonetheless.

It may not be an entirely satisfactory one – there are some open-ended questions, some plots left unresolved, some characters ending up together in a fashion that is both jarring, and yet all too tidy. And yet… I found I didn’t mind.

I realized that the story has never been what drew me into the comic. This isn’t to say the story was bad – but it was the art, the character designs, and the everyday extraordinariness of the scenes and concepts that won me over. All elements that will be just as fascinating regardless of what story is being told.

The story was a perfectly fine vehicle for delivering all these excellent moments, and phrases, and personalities – but I didn’t need it to be anything more than that.

Which just means that while I may have had a moment of sadness at seeing the current comic come to an end, I am all the more eager to see whatever Liz Greenfield comes up with next. Cause let me tell you – I’d bet good money that it will be awesome.

Meanwhile, DM of the Rings has come to a close as of today (and while the final comics were inevitably anticlimactic, I do fully approve of the farewell speech given, and wrapping things up with precisely one hundred and forty-four comics.) With this close, however, we immediately are moved forward to the new comic – Chainmail Bikini: The Nightmarish Legend of Deuce Baaj.

Right off the bat, it is clearly a different creature than the previous comic by Shamus Young – but the work of the new artist, Shawn Gaston, is quality, and the same irreverant humor is immediately present. While the LotR jokes may be left behind, this may open things up for more general commentary, and I suspect this strip will be a top-notch addition to the likes of Order of the Stick, Goblins, and Erfworld.

The first page itself certainly isn’t bad, and had some solid humor present – but it is the character profiles that already has me eager to see what comes next. The site is a little hard to navigate – but I’m willing to give that a pass on the first day of the comic.

For now, it’s got potential, and that’s all that really matters on day one.